I recently read a wonderful analogy of how to better understand Gods plan for our lives.

Have you ever watched a marching band perform at halftime during a football game? They create elaborate words or sentences in formation while belting out the school fight song. For the viewers at home watching on TV, the ones who have an aerial view, the acrobatics make perfect sense.  The aerial watchers have a clear picture of what the word formations say. To the fans in the bleachers the band just looks like they are gyrating around while playing instruments.  They often look lost while marching in circles trying not to bump into each other.

From Gods view? He sees it all. The big picture. He understands how the sound is to be played out. He sees and hears each and every note. Each stanza. He knows what the final symphony sounds like.

29 years ago today I said “I do”  having no idea that “In sickness” and “’til death due us part” would actually be part of my life song at such a (somewhat) young age. But God knew. And yet He is Sovereign. He is faithful. He is just. He sees my story. Robins story. Our daughters story. It all makes perfect sense to Him….even when it doesn’t make one bit of sense to me.

One day it will all be perfectly orchestrated. Until then? I am thankful that I was privileged enough to have been known, to have loved and been loved so well.

Happy 29th Anniversary, Robin Wooten. I can’t wait to see you again one day. I love you.

“For I am doing something in your own day, something you wouldn’t believe even if someone told you about it”~Habakkuk 1:5 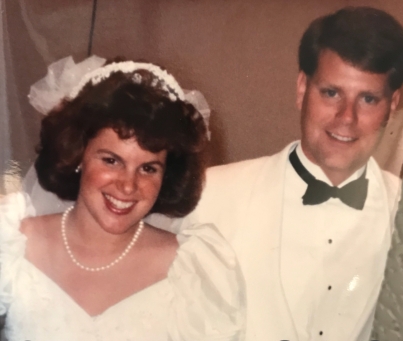